On the heritage side in Wolxheim

This statue was erected in 1912 on the limestone cliff of the Horn. On the base are engraved words of peace from Christ at a time when all that was spoken was war. It is the symbol of the peace desired by the population and is deliberately turned towards the Fort of Mutzig. The statue was inaugurated on 27 July 1912.
Beautiful panoramic view of the vineyards of the Grand Cru Altenberg. 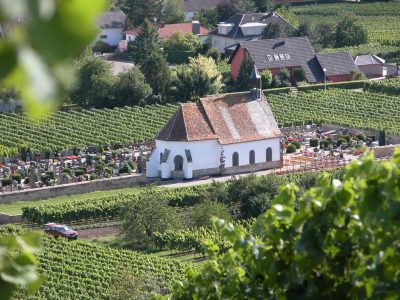 The chapel is located in the middle of Strasbourg’s vineyards, known as the Couronne d’Or, some twenty kilometres west of the city centre of the capital of Alsace.

Nestled in a setting of vines at a place called Le Canal, this building dates from the 15th century, but it is mentioned as early as 1342. It is located in the middle of the cemetery and consists of a nave and a hexagonal choir. Inside there are still two paintings by Carola Sorg (1833-1923). There is also a statue of Saint Denis with two heads and a tombstone in the floor dedicated to the miller’s wife. The chapel was renovated in 2000 by volunteers.

The first mention of the chapel dates back to 1512. The Chapel of the Holy Poverty (Saint Armuthskapelle) and its hermitage were demolished several times and rebuilt in 1738.

In 1808, the chapel was restored to worship and a new hermit took up residence in the adjoining house, which was rebuilt. In 1861, the state of dilapidation was such that a new, larger chapel was built on the site of the old one, as well as a new dwelling for the hermit.

In 1979, following a fire, only the sanctuary was saved.

The interior has not been restored. Open on request at the town hall

The church consists of a single nave with a gable front and portal, a polygonal choir and an axial bell tower. The church has a processional cross decorated with the symbols of the evangelists. The choir is decorated with four large marouflaged paintings. The furnishings in the nave consist of two side altars dedicated to the Virgin and St. Joseph and a pulpit from the mid-18th century, painted in imitation of marble, topped by the statue of the Good Shepherd.

The original organ was rebuilt by Sébastien Krämer in 1780, and retains its opulent case with three turrets and two fronts. The instrumental part was rebuilt by Callinet in 1844, then transformed by Rinckenbach in 1887. 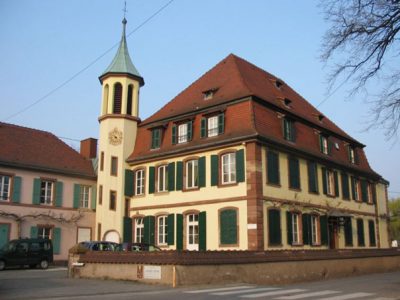 This mansion was probably built by the Laquiante family. It was intended to accommodate the families of the bourgeoisie who came to Soultz les Bains to take the waters.

It became a retirement home in 1949 after being bought by the Congregation of the Holy Spirit.

You can also reach the statue of the Sacred Heart through the vineyards and enjoy the view. Here are some ideas to discover here 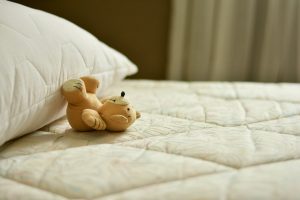 Are you looking for an accommodation for your thermal stay in Sulzbad? Here are our partners in the vicinity of Sulzbad to enjoy the wellness

A short stop in one of our winegrowers’ cellars is a must! Listen to them talk with passion about their profession. Open today

it is knowing in advance that we are going to enjoy it! How to resist the pleasures of the mouth in a region where gastronomy

After a busy day, what could be more pleasant than to find yourself in a cozy cocoon to rest ? Rather hotel, our destination offers