Dinsheim sur Bruche is a gateway to the Bruche Valley. This town offers many treasures. To discover them, you must take the time to stop here.

On the heritage side in Dinsheim sur Bruche 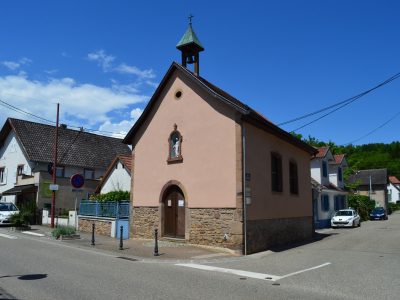 Chapel of the Virgin

The chapel is located in the centre of the village and was particularly frequented by pregnant women and people suffering from ringworm. The chapel consists of a short nave with two axes and a choir with sloping sides. The two stained glass windows are from the Berges ateliers in Toulouse. Their construction remains a mystery, but is probably attributed to the 17th century. The chapel was renovated in 1972.

Closed to the public 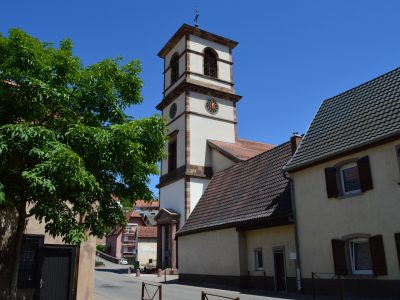 The neoclassical building, erected between 1828 and 1832, was completely restored after the fire of 1987. In 1836, Stiehr-Mockers installed the organ, to which Franz Kriess added a separate mechanical console in 1896. The organ was severely damaged in the fire: all the pipes had melted in the heat. The clock was installed in the bell tower in 1845. The two paintings that still adorn the choir today date from 1856 and 1861. 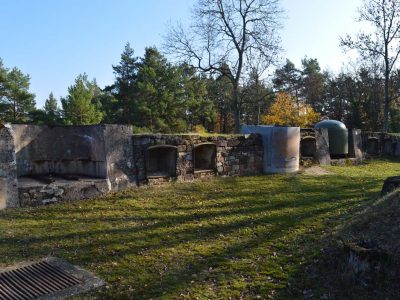 The Fort of Mutzig is an absolutely unique architectural, technical and military site. Located on the heights of Dinsheim sur Bruche, it offers a panoramic view of the beginning of the Bruche Valley. a small curiosity well known to hikers. At the entrance to the Bruche Valley, a strange little private garden has been created by a group of friends who are a bit of artists.

All the works found or recovered have a story to tell.

This building, which has just been completed (2021), is shaped like the hull of an overturned ship. It is located in the Folâtre Garden. 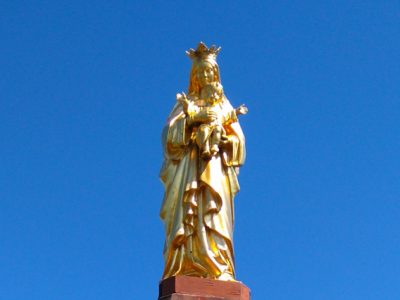 On 18 July 1875, the Holy Year, a statue of the Virgin and Child was erected on the Schiebenberg hill (alt. 317m), made of golden cast iron and placed on a stone base. It was erected as a sign of thanksgiving because in the 1870s, the mayor, the parish priest and the sexton were arrested by the Prussians for alleged connivance with the enemy. Natural site known for its orchids, with the occasional wild hedges on the side. Panoramic view from the Schiebenberg

In the Jubilee Year of 1875, a golden cast iron statue of the Madonna and Child was built on the Schiebenberg Hill (at a 317 The apartment (60m²) is located in the village of Dinsheim sur Bruche (Alsace) on a great green area of 35h to share with 2 sheep. The small village of Dinsheim-sur-Bruche is located about 20 kilometers from Strasbourg, next to the medieval city of Mutzig, on the Alsace Wine Route. It

it is knowing in advance that we are going to enjoy it! How to resist the pleasures of the mouth in a region where gastronomy