Museums of the Molsheim-Mutzig Region

The museums located about twenty minutes from Strasbourg by car, the museums of the Molsheim-Mutzig region are waiting for you.

We discover the local history, the archaeological treasures of the area, the daily life of our ancestors, very different from that of today.

We learn, we admire beautiful works, we let ourselves be surprised … let yourself be guided!

welcome to the Charterhouse !

Former convent of the Chartreux monks, the only intramural convent and the Bugatti Foundation.

At the reception there is a small temporary exhibition hall. On the first floor without elevator, the small traditional museum, history and archeology rooms.

2 rooms dedicated to Bugatti, on the first a space dedicated to the Bugatti lineage where a seat is created by Carlos Bugatti, cabinetmaker artist and furniture designer.
The exhibition of a v8 engine. Posters, period photos, presentation of the types of Bugattis in the race. On the ground floor 2 Bugatti a chassis of objects patented by Ettore a replica of the sculpture of Rembrandt Bugatti the brother.

The former convent of the Chartreuse houses many rooms that have been rehabilitated by the Chartreuse Volunteers team for more than 30 years. A magnificent cloister.

A reconstituted monk’s cell with the gardens.

Courtyard and aromatic garden as well as a cellar which hosts the conferences of the Art et Cloître association as well as the concerts of the Fridays de la Chartreuse association. 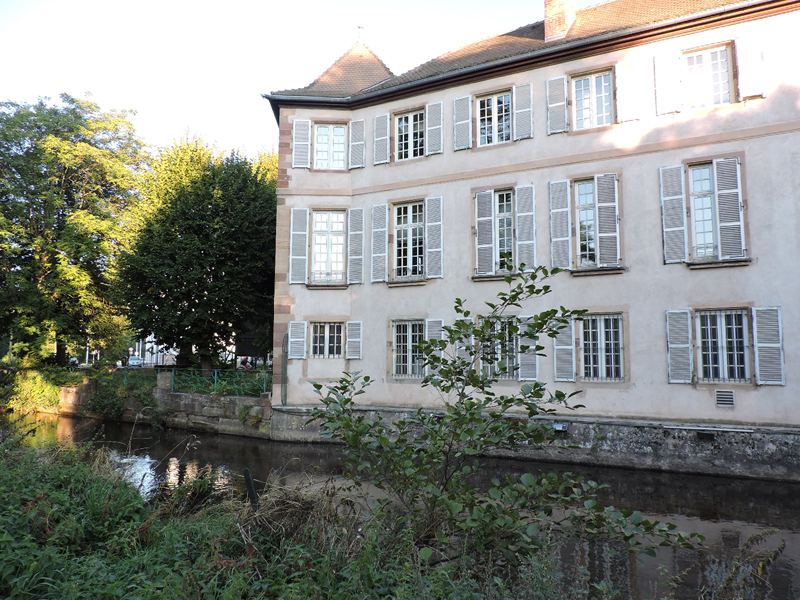 The Château des Rohan houses the museum within its walls. The museum installed in 1995, in its north wing. In this setting, breastplates and rifles including the famous Chassepot, architectural elements, a 13th century baptismal font, boundary stones and coats of arms, as well as temporary exhibitions, invite you to discover Mutzig’s rich past.

A new permanent space has been set up entirely and dedicated to archaeological discoveries made at the place called Rain in Mutzig.

Since 2010, a team of archaeologists made up of professionals, amateurs and students has intervened every summer to bring to light the remains of this exceptional prehistoric site. Dated around -90,000, the site is repeatedly occupied by Neanderthals, a nomad hunter-gatherer, living in the Middle Paleolithic (-300,000 to -35,000).

Based on some sixty remains, the section presents the environmental context of Neanderthal man before understanding the reasons for his settlement in the Felsbourg massif and his way of life in the Bruche valley.

Intended as much for neophytes as for specialists, this new exhibition route, embellished with maps, excavation visuals, illustrations and reconstructions of objects, provides a didactic approach to the Neanderthal camp discovered at Mutzig.